So much foolishness, so little time. Cover 3 is for anything we’ve missed.

1. Ain’t No Love | Mission one of the NFL is always to stamp out any sense of identity or individuality in players and vigorously discourage autonomy of thought.

You get that check. You are now expected to become android chattel outfitted with “do as I say” software. As much as salaries are for talent, they are for purchasing silence and blind obedience.

Seahawks safety Earl Thomas and newly retired veteran Bills cornerback Vontae Davis are having none of it. In their own ways, both have actively chosen themselves over the NFL machine. Earl Thomas is one of the last bastions of the bygone legendary Legion of Boom defense that reigned the NFC West for seasons. Not only is he still an active player, but he has been vocal recently about prioritizing himself on a team that has been cavalier, at best, about his value as the anchor of a disintegrated defense.

Self-care has become a pervasive buzzword teetering on reductive that can imply a good spa day will set everything right. We do have to remember that it includes a spectrum of remedies, most of which are necessarily self-defined, highly individualized and must  be accompanied by self-awareness and as clear a sense as possible of one’s mental state. In Earl’s case, self-care means an  overt declaration in his “workplace” that putting himself first is non-negotiable. What’s unstated here, is that this is as much a declaration of his humanity.

For Vontae Davis, self-care meant walking away from this same toxic workplace altogether. In an unexplained decision that sent its initial shockwaves across the league, the 30-year-old veteran spontaneously decided during halftime of the September 16 Bills-Chargers game to retire. Hours later, in his own words, he made his motivation clear (click image for the full story): 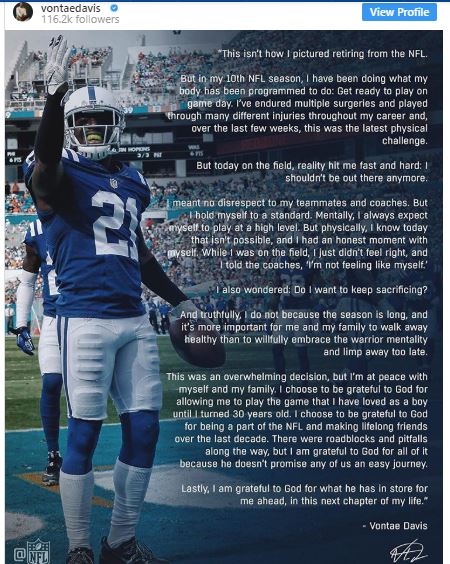 Not that Vontae, or Earl, have to explain a damn thing to us, but it is important that they control the narratives about their decisions to put themselves first in a league that uses weaponized paternalism to silence its workforce. These should not be considered “brave” decisions, but in a league where an 80% Black workforce is treated like property and discarded accordingly, they are.

2. Fresh Outta Logic, or Soft With A Capital “T” | There will be no changes to the incendiary update to the “roughing the passer” rule that completely ignores basic principles of physics, says the NFL competition committee. They have, however, clarified the rule to referees:

As it stands, Packers linebacker Clay Matthews wasn’t fined for last week’s hit on Cousins, but he proactively reached out to Senior VP of Officiating Al Riveron to clarify the rule. The NFL competition committee believes the calls will decrease — and they are the only ones who do.

But imagine this: a logical rule that would negate the need for these ridiculous calls in the first place. How’s that for “decreasing”? Refereeing is like being a lawyer, in a sense: there’s only so much objectivity that can be expected in the course of making judgments and determinations. Evidence is still examined with a human eye, which means it’s still filtered through bias, personal perspective and so on — not to mention the Rashomon effect that can take place with multiple perspectives viewing the same situation. You need look no further than some of the rotten catch calls that have taken place in the past couple of seasons alone.

At this rate, we can expect Tackle Tammy to show up in Permit Patty fashion to call the police on defenders. Maybe we can just get Thanos to snap his fingers and half of all tackles will just turn to dust — biggest do-over ever.

You want defenses to keep winning championships? Let them do their fucking jobs.

Check out Matthews’ comments below: